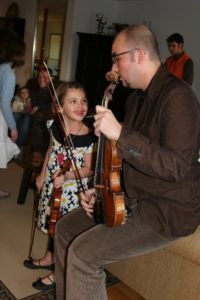 Coming from a musical family, Aurel Dascal was introduced to the violin at the age of 6. He continued his studies attending a music school and the music high school in Bucharest. In 2003 he was accepted at Zürcher Hochschule der Künste, Switzerland, finishing with a Bachelor’s degree in Music Pedagogy. He studied under the renowned professor Robert Zimansky.

Since then, his musical journey continued both as a teacher at various schools in Switzerland and Romania and as an active musician in orchestral and musical projects.

As a teacher his focus is to create a connection with the student, build trust, empower and create the right environment for learning.

Since 2017 he lives in Sweden with his wife and 2 daughters. He is now back to teaching after a career break where he focused on his other passion in life: food and ingredients. He comes to LIMUS after having a position as a chef at Grand Hotel in Lund.

Meeting him in the interview he tells us: “After a few years, I realized that classical music and teaching is what feels most important for me to work with. It feels like coming back to my family.”

Aurel started in oct 2020 with three training students in Swedish. From jan 2021 he will be our substitute teacher for Rachel Wieser as well as teaching own students in all ages.